March to April is the best time to visit Lapland because the darkness and freezing temperatures of the deepest winter are over and the sun is often pampering the winter wonderland’s visitors. In April the days are long already – if you are lucky the sun is up on the cloudless sky and shining till late. Easter is the top season when it’s most crowded and expensive but at other times it’s possible to find good deals on accommodation. However, Lapland is huge and very sparsely populated so even at the busiest time outside the biggest resorts you will find plenty of peaceful nature. Downhill skiing slopes may get busy in the weekends but on the cross-country tracks are unlikely to be very crowded.

Last Easter we enjoyed a skiing holiday in Salla “In the middle of nowhere”. This year we headed to an even more remote and secluded location in Lapland: the northern part of Pallas-Yllästunturi National Park, the 3rd largest and most popular national park in Finland based on number of visitors – over half a million annually – and which just turned 80 years. Other wonderful places to visit in Lapland include Ylläs in the southern end of Pallas-Yllästunturi National park and Saariselkä and Urho Kekkonen National Park. Another great skiing destination in Northern Finland is Ruka south from the Arctic Circle.

Unfortunately public transportation isn’t easily available and the most convenient way to get there is by car. It is possible to take a train to Kolari or fly to Kittilä or Enontekiö (closest airport but Finnair flights only once a week on Saturdays in the winter) and take a taxi to your accommodation.

Lots of snow, peacefulness and the cleanest air

If you are looking for snow you can’t go wrong with Lapland where snow covers the ground for at least half of the year from October to May. The snow is at its deepest in March and can even exceed 1 meter depths. It’s claimed that the air in Pallas is in the top 3 of the cleanest air in the world and it really did feel wonderful to breathe. The snow is usually so clean that it’s possible to melt it into drinking water (just watch out where you take it from!) and you might find also a stream or a spring with fresh drinking water straight from the nature – if it’s not frozen.

Cross-country skiing in the national park and on ice

There’s lots of skiing tracks to choose from for all skill levels. We were mainly skiing in the Raattama area where it’s possible to choose hills or flat ground, open fields or forest. In any case you can enjoy beautiful pristine nature. Lakes are frozen with thick ice so you can ski over the ice. The weather can be quite windy and change quickly from sunshine to fog or snowfall so it’s good to be prepared with warm layers (although not too much as little ones get hot easily), sunglasses, sunscreen and a backpack to carry everything.

How to keep the little one motivated to ski all day? This was my main concern before this trip. Kids often enjoy outdoors activities but would need to have variety, fun and lots of breaks with snacks built into the day to keep on going for hours. Here’s our favorites:

Snacks: juice, granola bars, sandwich, fruit, nuts… I always look for healthy snacks but pack along also a bit of chocolate and some sweets in case of most critical moments.

Some games to play:

Don’t forget lots of encouragement and praise – it usually does miracles!

We experimented snowshoeing for the first time. The snowshoes really helped walking on deep snow where without them you might fall waist deep in snow! But it’s a pretty heavy exercise if the snow is deep and soft. Actually, it turned out that it was easier for my daughter as she is lighter. Finding the right calm pace is helpful. Note that moving on roads or paths with snowshoes is slower than in winter boots – in the end we ended up taking the snowshoes off to go faster. Anyway, it was a lot of fun and nice variety to the skiing.

Breaks at wilderness huts and cafes

It’s a good idea to get a ski track map of the area where you are going to ski. A good practice is to plan the day’s trip based on breaks (our favorite part of the day!). Select at least one ski hut or café to be your destination and always pack along plenty of snacks, water and hot drinks. We visited Varkhaanjärven kota, Porokotajärven Kotakahvila and Montellin maja (on top of a very steep hill – so proud of my daughter for not giving up despite the long 3km/2miles climb!).

Ski resort Pallas is only open about 10 weeks in a year from mid-February till the end of April. We started our visit from the Pallastunturi visitor center which is open to visit free of charge. We watched a short, about 20 minutes interesting and educational video about the history and special nature of the area.

Ski resort Pallas is focused on offering a genuine experience of skiing on natural snow – which felt very pleasant, softer and less icy than artificial snow. It’s a popular place for off-piste skiing but we were careful to stay on the slopes. There’s 9 slopes with the longest run being 2,4 kilometers (~1,5 miles) but just two anchor ski lifts. At Easter time there were lines to the lifts but I would imagine that other times and especially during the week it there wouldn’t be waiting – even in the busiest time of the year there was plenty of space in the slopes. There was a good variety of slopes for beginners and families as well as more advanced skiers.

There is a very small café in the back-slopes with some tables and benches outside where it’s really nice to take a break and relax for a moment with a cup of coffee, tea or hot chocolate.

Summary of the best tips for skiing with kids:

Saved for next time…

Kite skiing – we saw many people kite skiing and I thought it would be impossibly difficult until I met two ladies in the sauna who were active kite skiers and convinced me that I should go on a course and learn it! 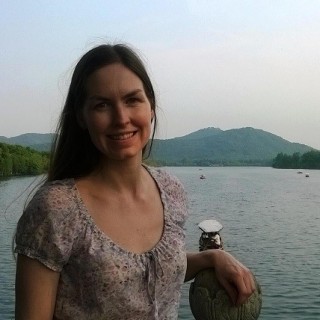